AFCCT make 1000th delivery to those in need 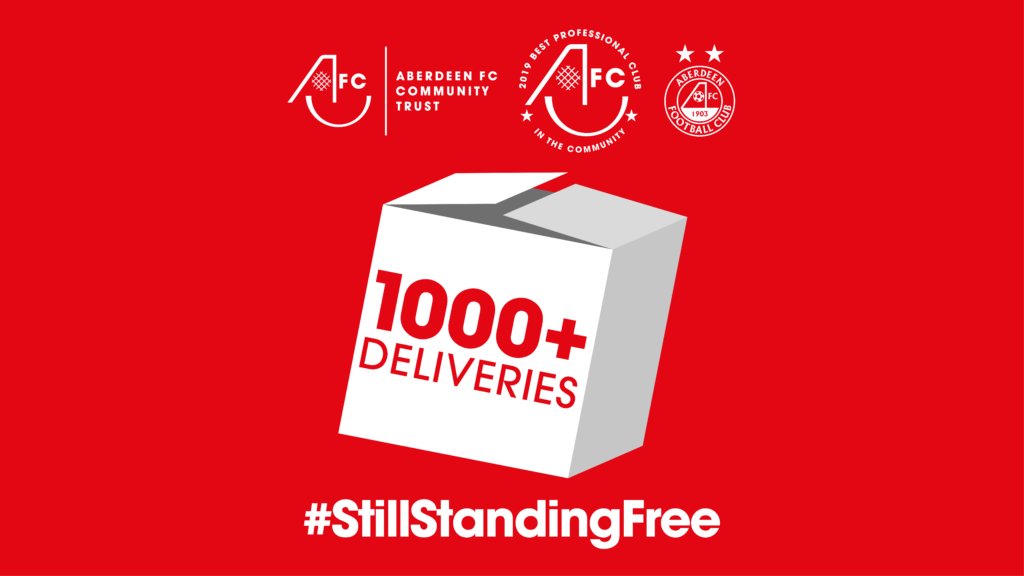 Aberdeen Football Club and AFC Community Trust have today notched up 1,000 deliveries of food to vulnerable families since launching the #StillStandingFree campaign in response to the coronavirus crisis.

Trust volunteers and AFC staff, including players, have been making vital deliveries of food packages, in conjunction with CFINE, which have now supported over 4,600 people including over 2,700 children who would otherwise not have had a wholesome meal.

Thanks to the on‐going fund‐raising from the Red Army and the wider community, another 400 deliveries can be made in the next four weeks and support another 1,800 people through the pandemic crisis.

The campaign, which supports the health and well‐being of fans and the wider community, has also involved staff, players and former players making calls to fans to check how they are coping with lock‐down. Over 8,000 fans have now received a call, with many saying publicly how much it has meant to them. This mass outreach programme is on target to reach over 12,000 fans in the coming weeks.

AFC’s commercial director, Rob Wicks, made the one thousandth delivery to a family in Torry.

He said: “I saw first‐hand just what these food drops mean to families and it’s been a sobering experience.

“Through the generosity of fans and investors, the Trust has now raised almost £170,000. Around 70% of that total is linked to the purchase of season tickets, whereby AFC investors have donated 10% of the 5,000 season ticket sales to the Trust. An impressive £59,000 has been raised through the Trust’s Just Giving Page.

“Our community campaign has had a tangible impact on so many people across our region, It’s brought the Club, the Trust and our fans together in a meaningful way that will continue beyond this crisis and it’s repositioned the Club at the very heart of our community.”

With a return to school unlikely anytime soon, AFCCT chief executive, Liz Bowie, said: “For many children in disadvantaged circumstances, their school meal is the only wholesome one of the day, so these deliveries are absolutely essential. We know that times are incredibly tough, particularly with uncertainty over jobs, and we’re incredibly grateful for the donations received to date, but there is still a need and we still need people to donate to our Just Giving Page to allow us to continue our food delivery service to vulnerable families.

“The support from the Club’s investors and the fans has been a life‐line for us during a period where we’ve seen our income streams decimated. Much of their donation will be used to support the roll- out of the Trust’s mental health initiative, MINDSET, for young people in the region.

“The fans have backed the Club through season tickets, despite not knowing what’s going to happen with the new season. That shows amazing loyalty. But, they can also be assured that they have helped raise significant funds for the Trust which is enabling us to make a real difference to those most in need from Mastrick to Macduff and beyond, through our food deliveries and welfare calls.”

You can make a donation to the Just Giving page here.