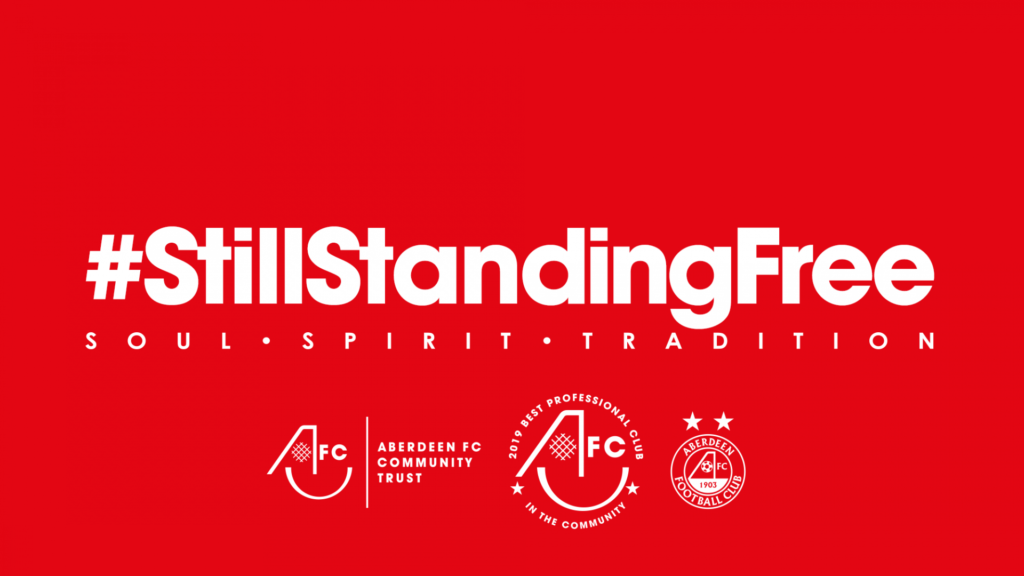 Aberdeen Football Club’s #StillStandingFree campaign, set up to help fans in the wider community throughout the coronavirus crisis, has reached one of its main goals.

In 12 weeks, the dedicated calls team set up by the Club and AFC Community Trust have spoken to over 12,000 fans as part of their mass outreach programme to check-in with people during lockdown.

These calls were prioritised with elderly and vulnerable fans the 70-plus age group being contacted first and has then spread to fans of all ages and circumstances.

Club and Trust staff and volunteers, along with players and former players have been phoning fans over the last 12 weeks to lift their spirits, especially those who have been shielding or are experiencing mental health issues.

It has been estimated that as many as one in four people will suffer from mental health issues as a result of being in lock-down and the calls have provided an invaluable social lifeline for those who struggling to cope.

Nicola Graham, project manager for the trust’s Dementia Friendly Project, has been a friendly voice on the phone and a listening ear to hundreds of people of all ages over the past three months.

She’s built up a strong relationship with several of the individuals who are most in need of support and calls them on a regular basis.

“Many of them are in their 70s and 80s and are living alone,” said Nicola. “While some have contact with family members, having someone different to talk to means a lot. It’s an opportunity for them to chat about whatever they want and to take time out from thinking about the challenges of day to day life and worrying about what’s going on in the world.

“A lot of them want to talk about football of course. They’re interested in what the club’s doing, what’s happening in the community, and like getting updates.

“When you talk to someone who’s particularly vulnerable, you hear in their voice what the calls means in terms of their mental health and wellbeing. There’s a noticeable difference between how they sound at the start of the call compared to the end when they are much happier.

“I called one woman who was having a really bad day. We spoke for about 45 minutes and she sounded so much happier by the end. The second time I called, it was like talking to a completely different woman. She said rather than just sitting by herself thinking about all the bad things happening, the call had kept her mood up for the two weeks until I phoned her again.”

The #StillStandingFree campaign was launched in response to the coronavirus crisis as a means of bringing the club’s fans and the wider community together and to identify ways to provide help where it was most needed.

Dons fans have thrown their weight behind it, donating thousands of pounds to the Trust’s JustGiving page, which has helped fund the food parcels which have been delivered across the region and volunteering their time to help in a variety of ways. AFC’s board directors also donated 10% of season ticket sales during April.

The positive impact it has made on people’s lives has been immense, with even the youngest recipients showing their appreciation.

A four-year-old, whose family receives regular parcels, told the delivery driver “this is like heaven” when he dropped off their parcel.

A woman in Aberdeenshire, whose mother had died the previous week, said: “I work every day and with five mouths to feed, the food parcels have really helped a lot.”

A dedicated email address has been set up for those wishing to contact the club to find out more about the campaign and how they can get involved. The address is info@afc.co.uk