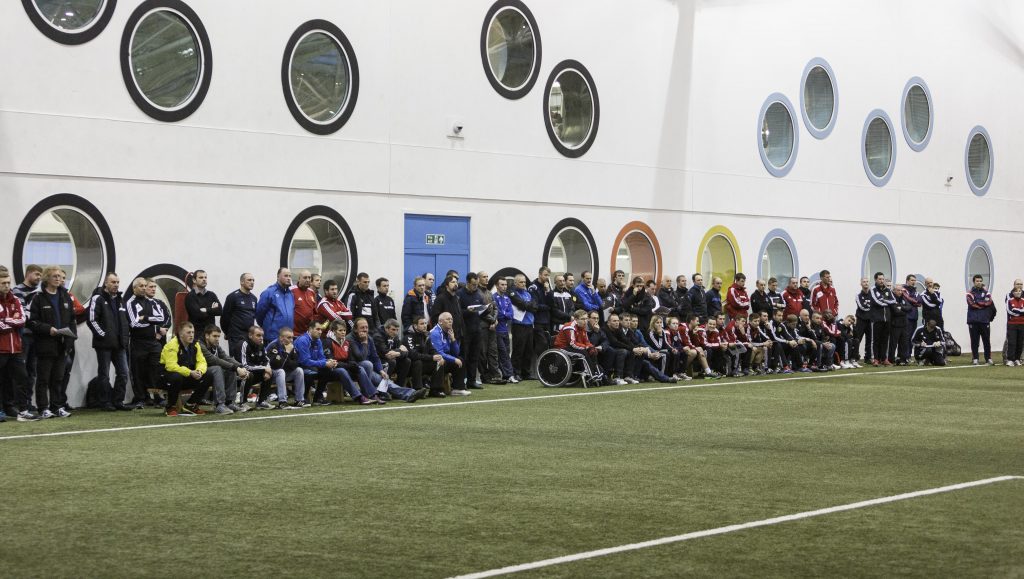 Over the last fortnight football coaches from the North Region have enjoyed two In-Service sessions organised by the Scottish FA in conjunction with AFC Community Trust. Both sessions were held at Aberdeen Sports Village and proved to be extremely popular with over 160 coaches participating in the sessions.

Over the last fortnight football coaches from the North Region have enjoyed two In-Service sessions organised by the Scottish FA in conjunction with AFC Community Trust. Both sessions were held at Aberdeen Sports Village and proved to be extremely popular with over 160 coaches participating in the sessions.

The first In-Service evening was held on Wednesday 15th October and was led by current Aberdeen FC Director Craig Brown. The former Aberdeen and Scotland manager had the attention of everyone in the room as he passed on his vast knowledge to the eager coaches in attendance. When asked about why he was happy to get involved Craig said, “How youngsters are coached at youth level in particular is important. Sessions like this one help ensure the coaches are teaching good habits and practice to the players from a young age.” “The area has an exceptional record for developing good players. You only need to look at how many players from the Aberdeen area are in the present Dons first team squad for proof of that. You must never stand still though. I like to think some of the tips I passed on will help the coaches improve on the fine work they already do.” “I was also technical director of the SFA for eight years and that involved going around Scotland, helping to get things in order at grass-roots level. We always found the North-East to be exceptional and I’m glad that continues to be the case.” The second In-Service evening was held a week later and focused on the sports science aspect of player development with Aberdeen FC’s Sports Science adviser Niall McFarlane leading the session.  Niall’s excellent practical content and in depth knowledge of how Sports Scientists can support football coaches was both engaging and educational for the gathered Coaches. Areas covered included principles of movement, injury prevention, strength and conditioning, speed development, plyometrics and power. Both evenings were followed by a private Question and Answer event for the Coach Development Group. The Group is a partnership between Aberdeen FC Youth Academy, Scottish FA North Region and AFC Community Trust to provide Award and Licence level Coaches with additional learning opportunities. Niall McFarlane was joined by Graham Kirk, Aberdeen FC’s Sports Scientist and the Youth Academy Sports Science Team at the Coach Development Group Question and Answer.  Steven Sweeney, Senior Scottish FA Community Coach who organised the In-Services said, “Many thanks to both Craig and Niall for delivering at our Regional In-Services. At the Scottish FA and AFC Community Trust, the education and development of Coaches in the local and wider community is a key focus."  "Better coaching leads to an improved playing experience for all children and youth players involved in the game, and we are delighted that Craig and Niall have been so open and shared some fantastic information and content that will help us all moving forward.”