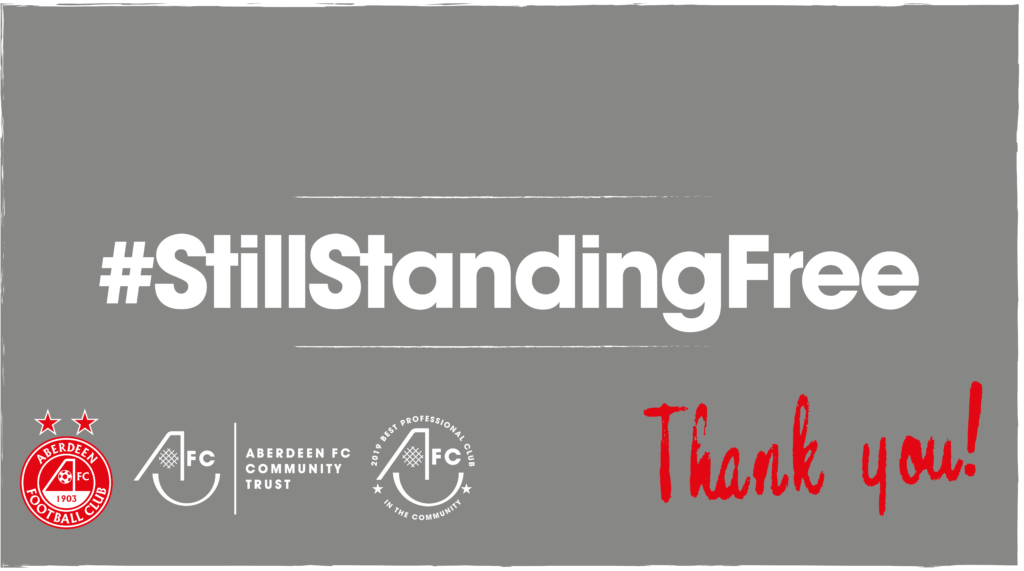 Aberdeen Football Club is marking the positive impact of its community campaign as it brings #StillStandingFree to a close.

Over the course of 160 days, the Club and AFC Community Trust (AFCCT) have made 2,600 food deliveries to more than 12,000 people, including 7,000 children who may not have otherwise had a nourishing daily meal, as part of its #StillStandingFree campaign.

Launched a week before lockdown, the campaign marshalled the forces of the Club, the Trust and the Red Army to offer practical help during this period. The campaign had a two-pronged approach: providing information and compelling content to engage and support fans, particularly those in isolation, and making deliveries of food and essentials to those most in need from Mastrick to Macduff.

A calls team, comprising Club and Trust staff and volunteers, has spoken to 15,000 fans, checking on their welfare throughout lockdown. Those who were identified as being particularly vulnerable or struggling had their spirits lifted by calls from players, former players, the Manager and the Chairman.

AFC Chairman, Dave Cormack, said: “With football back and children returning to schools, where they will receive free meals, our campaign has come to a natural conclusion.

“Our aim was to help our fans and the people of Aberdeen city and shire in these exceptionally anxious times, demonstrating that we are truly a Club at the heart of its community. By working hand-in-hand with the Trust, and with the backing of our fans, we were able to exceed the objectives we set out at the beginning of #StillStandingFree. The collective power of the Red Army, the Club and the Trust along with all its sponsors and corporates has been an inspirational force for good.

“This powerful combination has the potential to help the region get back on its feet and lift the spirits of its citizens, generating a pride and passion for Aberdeen, through the Club, that can support key economic indicators such as city region promotion, inward investment, education and employment, social inclusion and health and wellbeing. We’re now exploring how this could be achieved through a new campaign.”

Thanks to the generosity of AFC fans and the Club’s directors, through their matched funding of a percentage of season ticket sales, the campaign has also raised just over £500,000 for AFCCT.

Liz Bowie, chief executive of AFCCT, added: “As lockdown restrictions are eased, these funds will see the Trust partner with other agencies to provide a legacy food initiative and help the return to our existing programmes, focused on health, football and education, which support the community and those who need it most.

“Mental health issues are predicted to be one of the most serious consequences of the lockdown and these funds will go towards our innovative, interactive and fun programme, MINDSET, which builds confidence and resilience among young people.”

Joe Lewis said: “It’s clear the campaign has played a vital role across the community, but it’s also been a tremendous success in re-connecting the Club to its fans in such a meaningful way.

“It was just great speaking to some of our fans on the phone and hearing their stories about what being a fan means to them. I know that all the players involved really valued the opportunity to lend a hand and make personal connections with fans which brightened up their day and ours during lockdown.”

AFC and AFCCT will be organising a family fun day at Cormack Park for NHS workers and their families as soon as it is safe to do so. A special homecoming game at Pittodrie with a parade in Aberdeen is also being planned when full crowds are allowed. This celebration will seek to recognise key workers and thank fans and volunteers who supported #StillStandingFree.

UEFA & SFA pay tribute to the work of AFCCT

UEFA & SFA pay tribute to the work of AFCCT