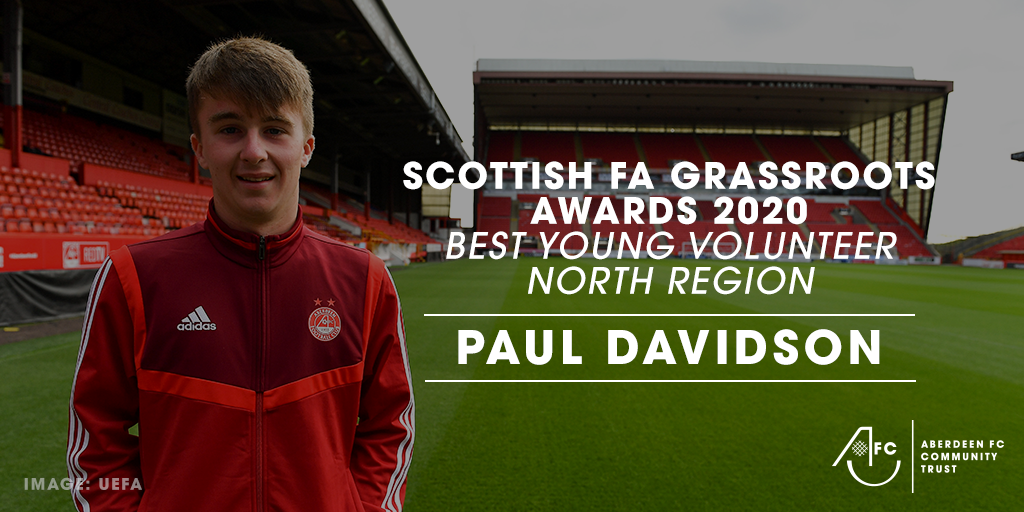 In August, Paul Davidson was awarded the Scottish FA North Region Best Young Volunteer award for his work volunteering with Grassroots clubs. Paul has coached with Colony Park Football Club since 2013, he began coaching the 2008 squad and has guided them up through the player pathway from 4-a-side to 11-a-side football, amassing 1000+ volunteering hours along the way! As the main coach Paul leads training sessions with the help of assistant coaches as well as taking the team line up at Sunday matches.

Additionally, Paul has regularly volunteered with Aberdeen FC Community Trust since the age of 14 years old, since then Paul has achieved over 500 volunteering hours with AFCCT. Being involved in a large variety of AFCCTs programmes has allowed Paul to work with lots of different people, ranging from 3-95 years old. In particular, Paul is fantastic at working with the elderly population and has helped develop and deliver the annual Garioch Games, a senior sport and fun activity week, in Inverurie. Additionally, Paul has also helped run a 35’s football festival as well as helping at our Summer Hubs, which provided a place for children from deprived areas to come and enjoy themselves and access meals throughout the day.

Recently Paul completed the AFCCT Youth Ambassador’s course, in which he attended for 2 years, where he participated in workshops on Mental Health, First Aid and Dementia Awareness training. This term Paul has had the opportunity to work as a Partner Schools Coach where he is out delivering in one of our Partner Schools for the first time. This has been a brilliant opportunity for Paul to take the lead in delivering one of our programmes and has allowed him to build relationships with the pupils and teachers he works with.

“To be recognised for doing the thing I love is truly amazing, with the correct attitude and support network around you anything is possible.”

Pauls award for Best Young Volunteer in the North Region is a true reflection of the hard work and dedication Paul has provided to the community over the past 7 years. For a person so young, Paul displays an outstanding work ethic and willingness to help and we look forward to seeing what the future brings, congratulations Paul!