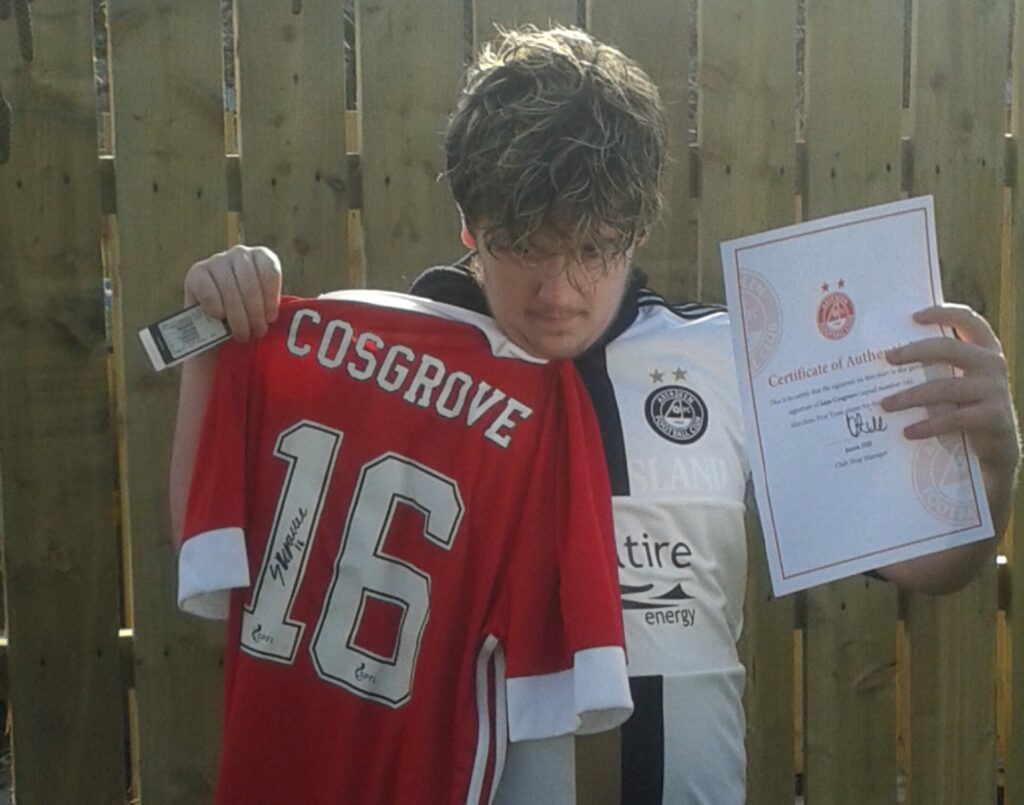 A fifteen-year-old Dons fan, Keiran Cheyne, has had his lockdown life transformed thanks to Aberdeen Football Club Community Trust (AFCCT) and members of the Red Army.

The young Hazelhead Academy pupil, who suffers from anxiety, was struggling to cope with the new lockdown. His Aberdeen City Council social worker, a Dons fan, mentioned his plight to a few other fans who immediately rallied round to help the family.

They got in touch with AFC Community Trust who organised for a bag of Club goodies to be delivered to Keiran. The contents included merchandise which had been donated to the Trust from AberDNA members, along with a virtual season ticket so Keiran can live-stream AFC home games.

The fans involved also donated a shirt which they got signed by Keiran’s favourite player, Sam Cosgrove, just before he left Pittodrie.

Keiran’s mother, Adele, said she had never seen her son so happy. “He was over the moon. When the delivery arrived, he was so excited. But I’ve never seen his face light up as much as it did when he opened the shirt and saw it was signed by his hero. I cannot thank the Trust and the fans involved enough. Their kindness and generosity have made a real difference to Kieran in what has been a really tough time for him and our family.”

Robbie Hedderman, Partnership and Business Development Manager at AFCCT, arranged for the goodie bag to be collated and delivered to Keiran after being contacted by a fan who had been in touch with Kieran’s social worker. He said: “Keiran’s story underlines how we are making a tangible, positive difference to those struggling with lockdown in our community.

“Many of the Club’s AberDNA members and season ticket holders who receive benefits as part of their subscriptions donate matchday tickets and merchandise, including shirts, to the Trust. We are then able to offer these to vulnerable or disadvantaged groups. It’s yet another example of the Club, the Trust and our fans working together to support those in need during these challenging times. We’re grateful to those involved for bringing this to our attention and delighted to hear first-hand how we’ve helped Keiran and his family.”